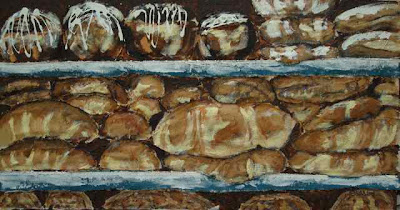 I accepted a challenge recently – take the textural style I have developed further. Push it to a different place. This is the happy result. I used raw canvas as the major textural element, along with large brushstrokes and impasto paint. The raw canvas was cut or torn into appropriate shapes. That process left some loose strings and fraying that I decided to keep. The raw canvas shapes were adhered to the board and stuffed a bit to give them more depth. I painted on the raw canvas using a large brush. I dripped glazing on the rolls for “icing.” I like how the roughness of the canvas, raw edges and thick paint serves the subject. Plus, there is a more abstract feel. © 2008 Barbara Sistak Baur, 16”x30”, acrylic, turned canvas, mixed media.

Close ups of the loaves and rolls. 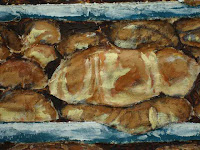 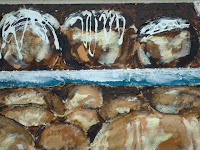 Go to the Fresh From The Studio store now 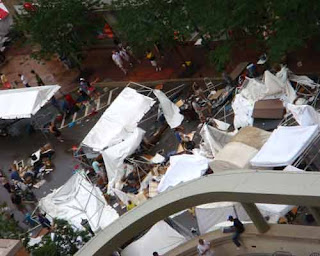 You may have seen the news about the disaster at the Evanston Art Fair, June 26, 2008 with tornado-like winds wiping out 20+ artist tents. Mine was among them. Not only that, but I was inside my tent when it was crushed!

I was at Evanston. Here is my personal story:

About 10 minutes before the storm, show officials ran around and told everyone that a bad storm was on the way and to take your art work off the display walls. First I tied on all the tents walls and clipped them tight. I was in my closed tent and taking some of the larger pieces down and leaning them together.

The wind was horrendous. The tent fabric was flapping violently and the everything was shaking. But I was ready for high winds, due to my experience earlier in spring, and felt secure with my weight system. Then the wind really picked up speed. I grabbed on to the tent frame to give an extra weight. Then it got heavy. And heavier. Then it pushed me, the display walls and the entire tent down the ground. I was trapped under it and the tent next to me which had blown on top of me. It was a domino effect. I fell into the next tent. I was holding the debris away from me and saw large chunks other people's stuff flying by. I couldn't get out. The tent and display frame was twisted and the fabric flapped around me. I heard crashes and screams from all around and I was hoping nothing would slam into me.

When the wind died down a bit, rescuers ran from debris pile to debris pile uncovering people. They finally got to me and said the storm wasn't over and to run for cover. Which I did. After a few moments, swarms of artists picked up all of my stuff and art work out of the rubble and pulled it to the sidewalk. The tent was carted away to a "dead tent" pile with dozens of others. I quickly threw artwork and everything else into boxes. Several young men picked up everything and carried it inside a nearby church. Thank goodness because then it hailed and rained like crazy.

I was bruised and scraped but okay. The artwork, somehow, made it as well. I think it was the fast action picking up everything. I examined everything and just minor repairs are needed on the frames. My able assistant (husband) thinks he can fix enough of the display panels to get me going for the Madison show. I will have to buy a new tent.

Join me and the Madison Museum of Contemporary Art for a 50th anniversary celebration of Art Fair on the Square on  July 12-13, 2008. I am pleased to have been invited to be a participating artist. I have been there as a fair-goer so I can tell you that you will see a great deal of quality art. But this is my first time as artist. It is a highly selected art fair and there are hundreds of artists. Go to the web site to get a preview of all the artists, get directions find out about parking and details on all the events.

In addition to the displays of nearly 500 artists from across the country, special events are planned to celebrate Art Fair's 50th anniversary, including live music and a host of free kids’ activities.   Rated among the top fine art fairs in the country, Art Fair on the Square is also the most important fundraiser for the Madison Museum of Contemporary Art, with all proceeds supporting the museum’s free exhibitions and education programs.
at July 06, 2008 No comments: